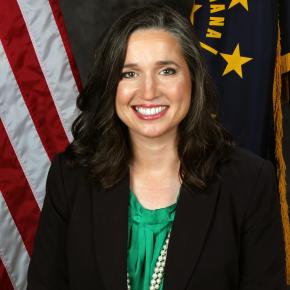 Auditor of State, State of Indiana

Tera K. Klutz is the 57th Indiana Auditor of State and the first CPA to serve as the state’s Chief Financial
Officer. She was appointed in 2017 and elected to a four-year term in 2018. As Auditor, Klutz is focused on
providing accurate information, maintaining and enhancing government transparency, and delivering great
customer service to ALL Hoosiers.
Prior to becoming the Auditor of State, she was elected as the County Auditor in Allen County in 2010 and
2014. She was named Auditor of the Year in 2016 by the Indiana Auditor’s Association. Before serving in the
public sector, Klutz was as a Senior Accountant at Crowe and PwC in Ft. Wayne.
Klutz holds a bachelor’s degree in Accounting from Indiana University- Purdue University Fort Wayne, and is a
member of the Indiana CPA Society, the American Institute of CPAs, and Cornerstone Lutheran Church.